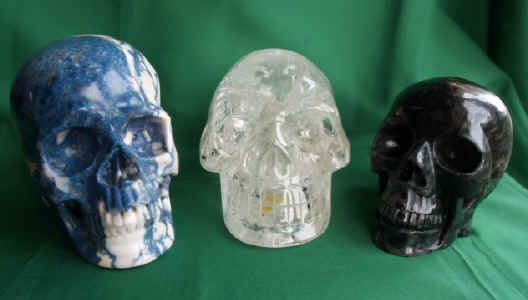 This page introduces you to Samadhi, our Clear Quartz crystal skull, who was the catalyst for the grounding, connection and awakening of the artwork, known as "The Stranger" (and hence my connection to Unity Consciousness); to Tzoltze, our Astrophyllite crystal skull; and to Ketu, our Blue Lepidolite crystal skull (who is now in new hands). You will also find some of my thoughts on the purposes for which modern skulls are being created today, and the reasoning behind their being.

Although fascinated by carved crystal skulls and their esoteric history, on a personal level I had never felt particularly drawn to keep one (having found them rather macabre, if I am honest!) but in 2008 I had been asked to source some by customers who wished to work with them. One thing led to another and I became (initially against my will!) hooked...

THE ARRIVAL OF SAMADHI:

Samadhi, our Clear Quartz crystal skull, was purchased in the autumn of 2008 along with two other skulls (who have since found homes with good friends) just two months before the Stranger's  awakening occurred (see more about this portrait and his awakening on our page "The Stranger"). On a factual level Samhadi is 15cm long by 11cm wide and tall and is carved from Madagascan Clear Quartz. He has some internal fractures and inclusions, including some of iron and some of chlorite. According to the Book of Stones, clear quartz's purposes include"... to show the value in becoming a vessel for the Light of the Divine... to bring heightened spiritual awareness... and to establish a strong, clear connection to higher guidance..." additionally Madagascan quartz is described as "... associated with ancient knowledge... activates the spiritual mind and assists in vision work and meditation... stimulates the body's ability to carry an expanded range of Light frequency." As a bit of a joke (luckily he seems to have a sense of humour) I nicknamed him "Duggery" (skull-duggery — get it?) when he first came home and although we spent a little time together he stayed very quiet and so it was never my intention to keep him, thinking he was destined elsewhere. However following Alison's awakening and bonding session with him a few months after he arrived he came out of his shell and is now part of "the family". He then told me (although he remains not much of a talker!) that he is "Samadhi" and that we can call him Sam. Following his words to me, I then researched the word "Samadhi" and found that it is a Sanskrit word — literally meaning "putting together" or "uniting". In Hinduism samadhi is seen as a state of profound concentration or absorption resulting in perfect Union with God. In Buddhism samadhis are numerous modes of concentration believed to ultimately result in higher spiritual powers and the attainment of enlightenment, or Nirvana. In view of how he worked with Alison, his bond with "The Stranger", his aura of stillness, and the work he is now doing, I think he has given a very appropriate name. He certainly exudes the energies of Peace and serenity and, as we have also discovered, is a great channeler of pure white Light energy. He enjoys working with "The Stranger" and people that come to sit with it, and more recently, since Tzoltze has joined us, they both have been doing healing / Lightbody assimilation sessions with people: individually, as "meditation / journeying" crystals, and as a pair in a healing layout. Here they work well at the extremes of our energy bodies: Earth Star / Soul Star; Omega Centre / Alpha Centre. This work helps people bring their polar extremes into balance and assists them in accepting and then integrating ALL aspects of their Self (Light and Dark) into ONE. 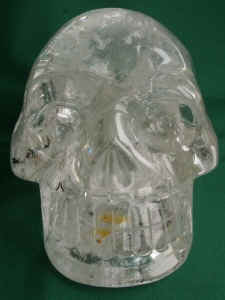 THE ARRIVAL OF KETU: 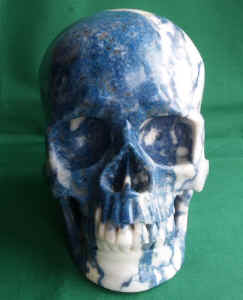 Some Observations on Modern Crystal Skulls:

At first thought, carving a crystal into the form of a skull might seem somewhat at odds with the positive esoteric purposes to which crystals are usually put. Perhaps the skulls might be regarded as rather "creepy" or macabre — perhaps they remind us of dark magic, horror, death or decadent rites. However when we step beyond our initial impressions we might see that the shape that the crystal has chosen to be made manifest in simply and literally shows humanity stripped back to the "bare bones" of who we are. It is as if we look into a mirror and are confronted with our mortality - yet we are also reminded of what we are as physical beings and of our innate capacity for exploring the nature of our reality through learning and understanding. Our physical body is simply a temporary housing — a vehicle through which our consciousness is given the opportunity to learn and grow, and as such our physical skull is primarily a container for our brain, which is the centre for our reasoning, functioning and direction. Here are seated our eyes, ears, nose and mouth — our most important sensory organs and the means through which we make sense of the world around us and communicate our thoughts and feelings. In turn, I feel that each crystal skull that is carved today also has the potential to be a receptacle — a place wherein a Being, energy or consciousness may choose to place themselves in order to work with or through its human Keeper.

Traditionally the Ancient crystal skulls were formed from quartz — usually clear quartz — yet the new skulls carved today may be found in a huge range of materials, perhaps reflecting the current varied and wide-ranging needs of humanity. I believe that at some level each mineral or crystalline material that is selected to be shaped into the form of a skull will have chosen to do so as a part of its destiny and its work with and for humanity and our planet. It is rare for modern skulls to be carved from a terminated crystal, being usually shaped from large blocks of massive or crystalline material — the size of the block required as a starting point being nearly twice the mass of the finished product. The nature of the material from which the skull is carved as well as its size (although size is not always important!) will need to have a resonance with the Being or consciousness that will choose to connect with it, and likewise with the person who is drawn to claim it as its Keeper, whose inner self and purpose at that time will also need to resonate with or be reflected in the properties and vibration of that mineral or crystal.

Each crystal skull is a profound amplifier of intent and as such, once awoken, their nature and the nature of their work will depend greatly upon their Keeper — what that person has to offer to the world; what their pathway is; what the main thrust of their work is at that time; the level of Power and vibration they are capable of working with; and also how they live their life, whether righteous or not. I believe that this means that each skull forms a deep bond or energetic link with its Keeper and the resonance and direction of its energies will therefore reflect those of the person with whom it has formed that link. This places a huge responsibility upon all those who have stepped up to be a Keeper or guardian for one of these skulls, as it is equally possible for the focus of a skull to be directed towards a positive OR negative purpose — minerals and crystals having an innate consciousness, but not a conscience. I further feel that the Being, energy or consciousness generally enters the skull AFTER the Keeper has stepped forwards to claim it, having formed a decision to do so dependant on the appropriateness of the Keeper to work with that particular Being, energy or consciousness.

It seems to me that the Being, energy or consciousness does not permanently occupy the skull, or "live" within it — rather that the skull makes its connections and then acts as a relay station between the Being, energy or consciousness and the Keeper or user. To draw an analogy we may see that the skulls perform a function similar to that of a radio set that is tuned to a specific frequency and — just as with a radio — the "sound" (information etc.) comes THROUGH the skull, which is not in itself the source of the "sound". This may mean that the energies working through the skull might change as the Keeper changes their energy or vibration, or that at some time it will be appropriate for the Keeper to pass guardianship of the skull and its energies to a new Keeper. Whatever the case, all those who are contemplating acquiring a crystal skull should know that in doing so they will be asked to take on the duty of being a skull Keeper and will need to fully appreciate and understand the commitment they are making, which should include working with the skull and the energies it channels in a positive and respectful manner.