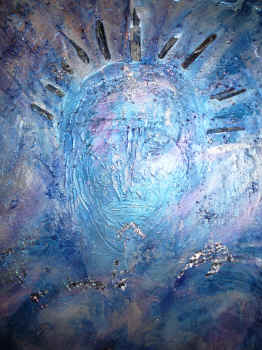 In October 2007 we were told that the Archangels had been "promoted" from their previous roles (an Angelic "Ascension" if you like) and Mark and I were invited to attend a special event that December to acknowledge their new state of Being and to help anchor their new energies, which were to initiate an energetic "upgrade" for the planet. The event heralded the message that some of us in bodily incarnation are being asked to step up and begin to assume responsibility for some of the tasks that were previously borne by the Archaeon in their "old" roles as "Archangels".

This does not mean that we "become" Michael / Raphael etc, but that we as Lightbearers, Lightworkers and Light Warriors of Earth have come of age and must begin to accept and take on the responsibilities for our planet and humanity that have been held by the Archangels on our behalf, whilst we have grown and found our feet over the aeons that have passed. Our planet and our destiny is now fully in our own hands — we are the ones who must make the decisions and take responsibility for the future of our planet and the generations of humanity to come. We are not abandoned however — our loving Archangelic "parents" are still around us to offer support and guidance when we ask for it, but perhaps should be seen more in the role of "grandparents" rather than "parents"! We are also supported by those Ascended Masters who have made or are making the transition to the Angelic realm as forerunners of this change. (See updated information further down page.)

As soon as I saw their new energies, I heard these words and knew them to be true.
ALLOW THEM TO RESONATE WITHIN YOUR HEART AND ACCEPT THEM IF YOU CAN:

The wings are off — there is no need to remain in disguise - either them or us.
For they are as we are: and we are as they.
In truth we too are angels — all of us.
For them, there is no longer a need to be seen as "other" — a realm and race apart,
created by God in a different way to that of the race of "man".
The time has come for them to show themselves in the fullness, completeness and brilliance of their strength,
displaying their solidarity and equality with all those who have chosen the side of Light.
And what of man?
Brought up in a world much different to theirs through choice;
learning and growing so that we may understand that which seeks to cloak the Light, and know darkness and polarity.
We have fallen so far we have seen ourselves until now as being "lesser" and so separate from the Angelics -
they on wings above us; we crawling the earth below.
But all are same at source.
Created from sparks and with sparks of Light within us — ALL sons and daughters of God.
Now we too must step up.
Acknowledge our heritage and our roots; our connections and our lineage,
which joins us to those who have been seen before as "other" - greater; purer........
We ARE the same, with the same strengths and convictions;
the same Light of Spirit within, through and around us.
The lines are drawn.
Shoulder to shoulder we stand.
It is time for Angels and Man to be as ONE again.

This new impetus was begun in the autumn of 2007, following word channelled through Alison Knox, who has since been guided to paint completely "new" pictures of some of the Archangels in their new energy forms (see photos below). They required a new title, to underscore the fact that there has been a change in their energies and also in their field of responsibilities, and we are now referring to them as "ARCHAEON". We are told that as Archaeon they exist as Unified Beings of Light, with their masculine and feminine aspects  in complete unification. They tell us that they have always been connected in consciousness to each other, across the legions of Archangels, but that since their complete unification their Collective Group Consciousness has become significantly strengthened, so that in essence they act as a singular Unified Being.
From this point on, when you refer to a named male or female aspect, and prefix that specific name with the title "Archaeon" (e.g. Archaeon Michael), you will draw to you that Unified aspect (Michael and Faith) in their new energetic form. If you specifically wish to call upon solely a specified masculine aspect of the new energetic form (e.g. Michael), we suggest you use the title "Archon"; and if you wish to call upon solely a specified feminine aspect (e.g. Lady Faith), we suggest you use the title "Archaea". If you call upon the Archaeon without specifically naming them, then you will get them all as a singular Unified Consciousness!
We are told that their actual "title" is not really important, but that how we understand or relate to the energy we wish to link with is actually how the energy link works. I guess this means we can call them what we like (I usually drop the titles anyway!) and we will draw whatever we aim to draw to us. Therefore, if you choose, you could do the same, and simply ask for "Michael" or "Faith". Names and titles merely help us to order things in our minds, which is a very "human" thing to do. When we see them as pure energy and call them by simply bringing that energy signature to mind, we will understand why names and titles have so little meaning to those that exist as Bodies of Light!

We were completing some more research for our Angelic Multidimensional Healing Course, and queried with Metatron whether ALL those who held the title "Archangel" are now "Archaeon". He told us that only some of the Archangels have extended their roles, and taken on this new title (a list of those whom we currently work with follows). When we asked how / why there was now a differentiation he told us that those now holding the title of "Archaeon" have extended their role (and so too their energies) to undertake the overseeing / training of certain souls who have been or are embodied, in order that they may be readied and trained to take on their old Archangelic roles and functions. Slowly some of the Archangelic's responsibilities are being devolved to Ascending and Ascended humanity, and the Archaeon are taking more of a "grandparent" role with us, rather than that of "parent", which remains the function of the Archangels. (As an aside, we feel that Ascended Master Lord Kuthumi is one of those "returning" Archangels, and understand that he has taken the name "Agrippa". We also feel that he is one of the new "Solar Archangels" for the New Age of humanity, taking on the Gold Ray and some of the duties performed by Scaphoriel and Metatron.) Some roles and functions performed by the Angelic realm are not yet ready for devolvement to Ascended humanity — likewise, humanity is not yet capable of holding those responsibilities. Therefore those that retain the title of Archangel still hold sole responsibility within the Angelic Realm for the duties associated with their posts. Finally, Metatron wished to point out that, although we tend to regard hierarchical roles or functions from an Earthly point of view as being a chain of command in order of importance or eminence, an Archaeon is not regarded in the Spiritual and Angelic Hierarchy as being "more than / greater than" an Archangel!
THOSE WE KNOW TO BE HOLDING THE TITLE "ARCHAEON" INCLUDE: ARIEL (an aspect of Uriel), AZRAEL, GABRIEL, HANIEL, LUX'EON, METATRON, MICHAEL, RAPHAEL, RATZIEL, SCAPHORIEL (and twin flame SERAPHIEL) and URIEL. 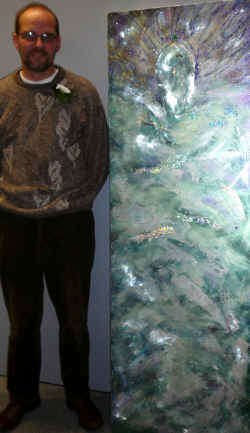 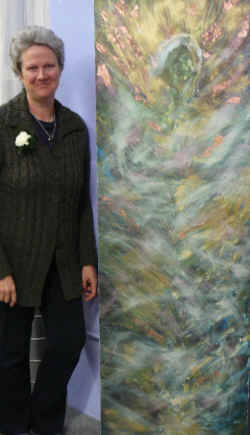 For much more information about the coming of the Archaeon from Alison, follow this link to the page on her website "Archaeon — On Wings of Light" and also have a look at their fabulous pictures in much better quality and detail than these! Above you will see a photo of Mark with Raphael and Hilary with Azrael taken at the event hosted by Alison in December 2007, when their — and our — new energies were anchored. Excuse the poor photography, but it was the end of the day and we were absolutely shattered!

FURTHER ENCOUNTERS WITH THE ARCHAEON — a personal journey:
follow this link to a new separate page detailing some of my own experiences with these art forms and their fabulous energies.....